This tweet and news story from The Netherlands caught my eye this morning – “Dutch Railways will make trains to Berlin and Brussels much faster: “We want to seduce air passengers”” the title says.

Whether prioritising that route – to get people off planes – even makes sense is open to question. It doesn’t feature in the top ten routes for that I analyse here.

The article then goes on to say that Amsterdam to Berlin trips will be reduced by 30 minutes, from 2024.

But the current journey time is 6 hours 26 minutes Amsterdam Centraal to Berlin Hauptbahnhof… I am not sure a reduction to 5 hours 56 minutes is going to help much.

Seriously though, if you wanted to do something about this route, and to speed it up, what could you do? The example here could no doubt likewise apply to other cross border routes as well – that’s why this post will be so detailed.

First, what could you conceivably change to speed up a rail connection? These are the questions to ask

I’ll answer each of them in turn.

This is the route the Amsterdam – Berlin train takes – black line:

And this is the relevant part of Open Railway Map – mid-green in Netherlands is 130km/h, yellow-green around Hannover is 200km/h, dark orange east of Wolfsburg is 250km/h:

What are the plans to speed up either of these?

Germany is planning a new, 300km/h line between Hannover and Bielefeld – that will reduce journey times between those two cities by 18 minutes (more here). The Amsterdam – Berlin train would take half of that route, so let’s generously list 9 minutes to be saved with that, by 2030.

Deutsche Bahn has order a fleet of 230km/h trains from Talgo to deploy on Amsterdam – Berlin from 2024. However those will only – in terms of speed – save any time between Wolfsburg and Berlin – about 150km of track. That saves 6 minutes, by 2024.

I am not aware of any other plans for infrastructure improvements anywhere else along the route currently.

Is there any alternative route that could be taken?

I cannot think of any long distance route that is as close to as-the-crow-flies straight as this is! Look at the map above. The only route change would be a small one in Berlin – the Amsterdam-Berlin train uses the old “Stadtbahn” through Zoo station to reach Berlin Hauptbahnhof. This has a Spandau-Hauptbahnhof journey time of 16 minutes. Running around the ring via Jungfernheide and into the lower level of Berlin Hauptbahnhof takes 10 minutes. This could save 6 minutes, immediately.

Would it be possible to eliminate stops on the route?

This is the really interesting one. This are the stops on the direct services each day: 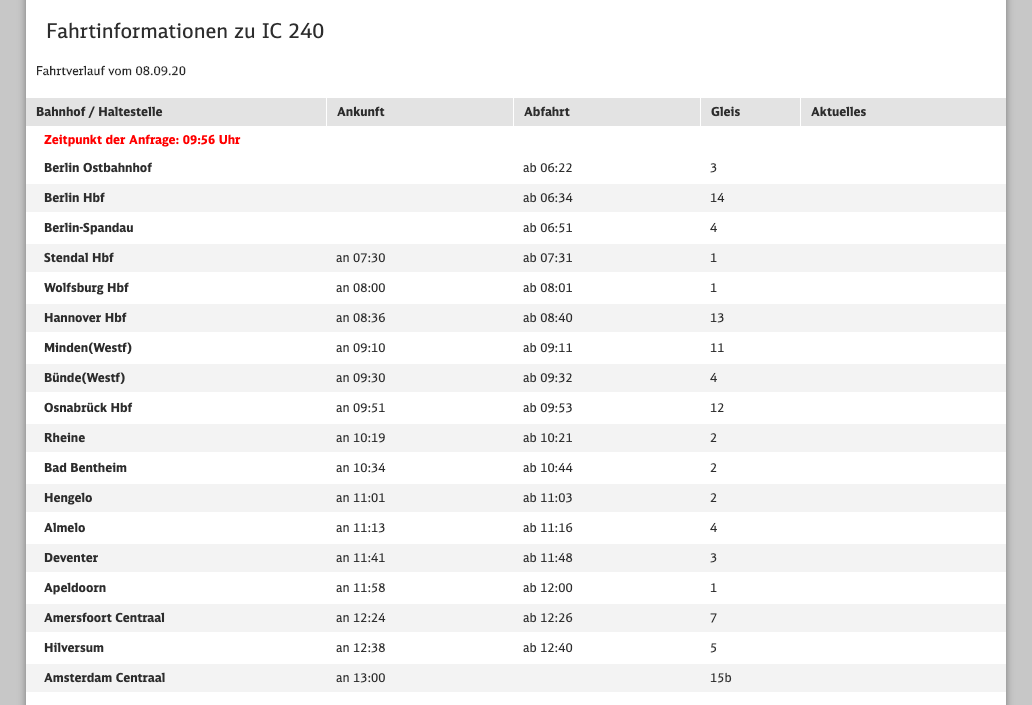 Which of these could you eliminate?

Stendal (popn. 39000) – this is even on a spur off the high speed line, so would be a good time saving. But other than very early morning and late evening ICE trains that stop there, the Amsterdam IC trains are the only direct Berlin – Stendal trains there are throughout the day. Were this stop to be eliminated, Deutsche Bahn would have to put on an alternative service to serve the town.

Wolfsburg (popn. 124000) – better served than Stendal, as some ICEs stop here throughout the day, but due to the Volkswagen plant there are considerable numbers of commuters to/from Berlin. As with Stendal, DB would need to provide some sort of alternative – a Berlin-Hannover stopping IC train in the hours the Amsterdam train does not run perhaps?

Hannover (popn. 500000) – cannot be eliminated as it is a major city and major hub station

Minden (popn. 81000) – Amsterdam IC train is its only direct connection to Berlin, but it is reasonably well served by other ICE and InterCity trains to Hannover, and RE trains to Bünde. Line speed is low through Minden anyway, so time saving is limited.

Bünde (popn. 45000) – similar to the situation in Stendal, and a harder problem to solve than Minden as other connections to Hannover are poor. I don’t think you can easily eliminate this one.

Hengelo (popn. 80000) – first stop in The Netherlands. Important for regional services. Keep it.

Almelo (popn. 72000) – served by other trains to Hengelo or Deventer. Eliminate.

Apeldoorn (popn. 162000) – well served by other trains, not important for connections. Eliminate.

Hilversum (popn. 90000) – served by trains to Amersfoort or Amsterdam. Eliminate.

Of course the new boss of NL in her interview… only mentions the elimination of stops on the German side. Surprising, that.

Are there any other operational time savings to be made?

The new Talgo trains to be in operation by 2024 can run on both the 1.5kV electrification in The Netherlands and the 15kV electrification in Germany, eliminating the time spent changing the locomotive at Bad Bentheim. I presume crew would still need to change though. So the current 10 minute stopping time could be reduced to 3 minutes – saving 7 minutes.

Are there any non-speed factors that would also help?

The carriages used for the Amsterdam – Berlin IC train are now rather old. They might have some retro appeal, but they feel outdated, and the age of the carriages also dents reliability. There are power sockets for laptops, but no on-board wifi currently. A newer, more comfortable train with reliable wifi might help rail gain a bit of market share, especially for portions of the route.

Are there any really radical solutions?

Deutsche Bahn runs so-called ICE Sprinter trains on routes such as Berlin-München and Berlin-Frankfurt(Main) – trains with very few stops that run at peak hours only. The problem with these services is that they are hard to timetable as they do not easily fit into the regular hourly timetable. A very radical IC-Sprinter for Amsterdam-Berlin would stop only in Amersfoort, Osnabrück and Hannover – that could save an additional 20 minutes.

Beyond that the only other option would be to increase the line speed, or even build new high speed lines – and examine that for all of the route between Amsterdam and Minden. The short distance between the towns on the Dutch side means squeezing anything more than 200km/h there would be impossible without a whole new line. Upgrading Bad Bentheim-Osnabrück, and especially Osnabrück-Minden to 200km/h or even 230km/h would be operationally possible, although would lead to howls of protest due to the additional noise from inhabitants of villages near the track – but that would be the most economic way to reduce the journey time even further here. Only upgrading additional lines to 200km/h in The Netherlands, and to 230km/h on the German side, could possibly save a further 30 minutes.

Making major time savings on this route is very hard.

What can be foreseen for 2024 is a reduction of 12 minutes (eliminate Stendal and Wolfsburg), 4 minutes (eliminate Minden), 12 minutes (eliminate Almelo, Deventer, Hilversum), 7 minutes (no locomotive change at Bad Bentheim), 6 minutes (run to Berlin Hauptbahnhof via Jungfernheide instead of Zoo) and 6 minutes (230km/h Talgo trains) – a 47 minute reduction. Slightly better than the 30 minutes NS has talked of, but not without its problems due to the stations eliminated. Total Amsterdam Centraal – Berlin trip time: 5 hours 39 minutes.

Additional speed increase on Wolfsburg-Berlin, and new line Hannover-Bielfeld, by 2034, reduces the trip time by a further 20 minutes, so: 5 hours 19 minutes.

Radical solutions such as IC-Sprinter services, and maximum speed upgrades for tracks in The Netherlands and Bad Bentheim-Minden could save a further 50 minutes, so: 4 hours 29 minutes.

Oh, and one more thing…

Those Talgo trains that Deutsche Bahn has ordered for this route… they’re using an as yet untried locomotive, and even Talgo’s high speed power cars have not been tested or approved to run in Germany or Netherlands. And Talgo’s articulated carriage design is unusual, and had only previously been approved to run at 140km/h in Germany [UPDATE – as has been pointed out to me in the comments – this is incorrect. RZD’s Talgo night trains are approved to run at 200km/h in Germany. Only DB’s old Talgo night trains were cleared for 140km/h]. And Germany has had all sorts of nightmares approving unusual locomotives, like the Škoda build class 102. So getting all this into operation by the December 2024 timetable change… looks to me to be a push. I’d be happy to be proven wrong.

So overall: good luck with all of that NS and DB!

Useful extra data about the stops on the German side here – thanks Michael!

You can see the planned stopping pattern between Hannover and Bad Bentheim here. So yes, the train won't stop at Minden anymore (replaced by a stop of a twice-hourly ICE train from Düsseldorf to Berlin) https://t.co/bxh3MVbOUx pic.twitter.com/bCrxrnlD0r

An earlier version of the post stated the speed on the Dutch section was 160km/h – according to Open Railway Map. Dutch rail nerds tell me it is instead 130km/h. Because the map uses the same colour for that entire speed bracket. The post has been corrected accordingly.

This thread is also useful:

Great article, absolutely agree with the general conclusion.
Ops stuff:
I think the "Sprinter" is the only viable solution for a good long-distance connection, and you'd need to keep the current IC for the smaller stops. Compare Hannover-Köln below. 1/x pic.twitter.com/DwEfSyhYzL

The consensus among rail nerds is it would be better to keep Deventer and drop Apeldoorn. The post has been updated accordingly – but it makes no difference to the time saved.