One of the questions I am often asked when discussing rail travel in the European Union is why there is no night train on a given route. “People would take it!” I am told, and I do not doubt that. It is not the demand side that is necessarily the problem. It is the supply side – no-one wants to run the service, even if a night train could be profitable. In this blog post I am going to explain why, even if a service would be profitable, it still does not mean the service will run.

I will explain why this is the case using the example of the Paris-Barcelona route.

There are two direct TGV daytime trains each way each day on this route, taking 6 hours 25 minutes. Details of these services are here. That is longer than most people will spend sat in a train, especially business travellers. So a night train would be an option on this route.

But let’s look at the financial choices facing the company running the service, SNCF.

The cost to run a train is relatively fixed once the service has been established – the track access charges and staffing costs remain pretty much unchanged whether your train has a single person on board, or has every seat filled. The economics of the daytime trains look something like this*: 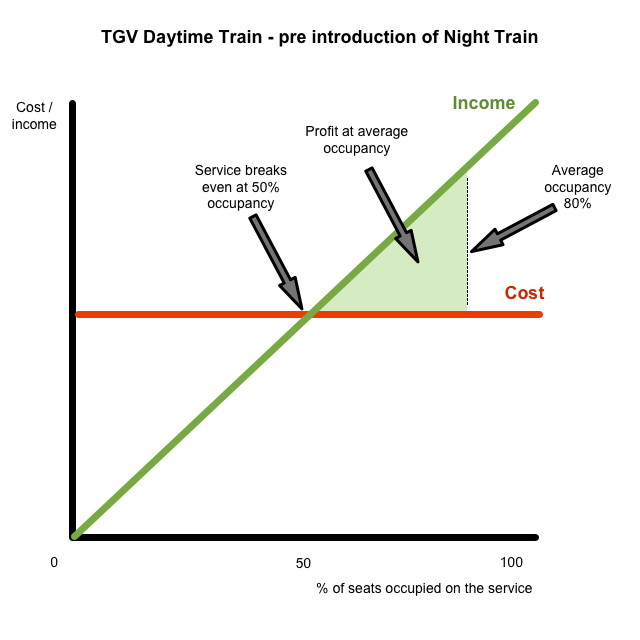 Let’s then imagine a night train was introduced on this route (night trains Paris-Barcelona ran between 1969 and 2013), with a trip time of around 11 hours – as night trains cannot use the high speed lines TGVs use. At night this is not a problem though – departure from Paris at around 21:00, arrival in Barcelona at 08:00. But the additional staffing costs for a longer trip, plus the additional operating complexity of changing a locomotive at the border (not necessary with a TGV) push costs up for the night train. So the economics for this one would look like this: 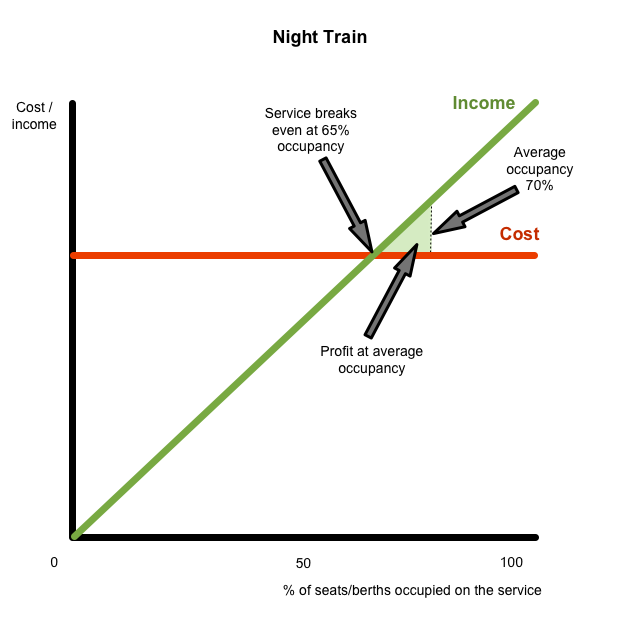 But this is not a zero sum game.

Each TGV has 500 seats, and a night train around 300 seats/berths. Let’s imagine that an average of 50 TGV passengers take the night train instead of the TGV. That leaves the economics for the TGV looking like this: 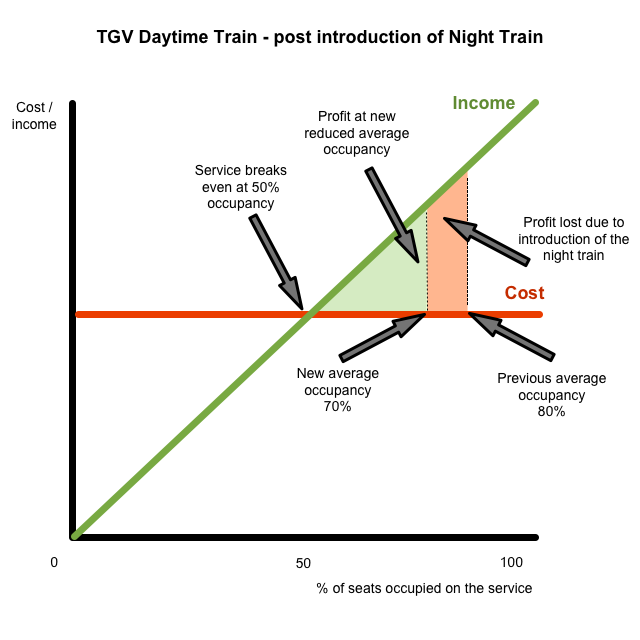 The profit lost through the introduction of the night train is greater than the profit gained from running it!

Or to put it another way, if you are in the shoes of SNCF, what do you do?

In other words, rail’s market share on the route would have increased were a night train introduced, but the profit for SNCF would have decreased. If you’re SNCF management it’s a no brainer – you don’t run the night train.

You could I suppose try to apply some public or political pressure to SNCF – and that to some extent worked with regard to national night train routes within France – but SNCF behaves like the most ruthless capitalist firm when it comes to its international operation, so I cannot see a kind of service publique ethical argument working here.

But hang on, you are probably thinking, how about finding someone else to run the train?

Sadly that is not at all simple. You could start with Renfe, Spain’s publicly owned railway firm. But they have entered into what amounts to a non-aggression pact with SNCF for France-Spain daytime services, with SNCF running Paris-Barcelona, and Renfe running the other services (Madrid-Marseille, Barcelona-Toulouse, Barcelona-Lyon). Renfe also only has its low capacity Ave 100 trains that can operate into France, and is meanwhile selling its remaining night train stock to India. So that’s a non-starter.

Were anyone else – one of the night train insurgents like Snälltåget or European Sleeper for example – to try to run a Paris-Barcelona night train they would face a series of hurdles, foremost among them the absence of rolling stock (especially anything compatible with 1668mm Iberian gauge), or operational hurdles to run a low speed night train on the standard gauge high speed line from Perpignan to Barcelona. I have explained more about the rolling stock headaches in this post about scaling night trains, and wondered whether the EU could solve this problem in this post.

Is there anything else that could be done?

The only real way to reduce the fixed costs of running night train services would be to reduce track access charges for them (France has done this for freight during the COVID pandemic) – that could perhaps entice companies like SNCF back into the international night train business, but it would still leave the rolling stock problem unaddressed.

Anyway, so there you have it. Even were a Paris-Barcelona night train profitable, that does not mean one will run – because for SNCF it would reduce its margins on its daytime trains, and no other firm is in a position to operate such a service instead. We, European railway passengers, and citizens wanting a green and time efficient way to travel in Europe, all lose as a result. It’s high time for the European Union to solve this conundrum!

* – I have no way of knowing exactly what the occupancy rate is, or the break even point. I have taken educated guesses here for the numbers in these diagrams. These graphs also assume all passengers pay the same price, and there is no differentiation between classes of accommodation on the trains. These are fair enough assumptions to prove the point I am making overall.

2⃣ From Perpignan to Barcelona HSTs can only run at 200 km/h due to freight crossing.

This is a parliamentary reply.
There is also the year 2011https://t.co/l9liT3juLx

This video made by @decoassociacao is *fantastic*, and now my experience of Portugal is behind me I will make a response video and publish it later! #CrossBorderRail