In as far as there is a debate about the problems of cross border railways in Europe, one question crops up over and over: “why is there no Skyscanner for rail?” If one website can aggregate all the flights in Europe and allow a customer to compare prices and book them, why is there no proper equivalent for rail? (Omio, Trainline, NS International etc. are of course trying to solve this problem but are still a long way from really cracking it)

But before we even get to the issue of booking a train ticket, there is a more elementary problem – even finding out what trains run on cross border routes.

No complete European railway timetable exists, and that is a serious problem.

Please don’t say here “but what about the ex-Thomas Cook European Railway Timetable?” – sure, it’s a great publication, but it is based on the format of a paper timetable, and many trains relevant for cross border travel are not in it. In other words it is good, but not sufficient.

The closest there is to a digital European railway timetable is Deutsche Bahn’s Reiseauskunft. It’s the tool that even the venerable Man in Seat 61 recommends. That will be the tool we will use as the starting point in each case. And we will attempt both trips a fortnight from now – on Thursday 27th January, departing at about 8am in each case.

If we look at the details of the connection it involves almost 10 hours in Koprivnica!

Also if we look at DB’s plot of the route we can also see the proposal is hardly logical. These cities are about 70km apart as the crow flies, and the shortest route by rail between them is 88.5km. 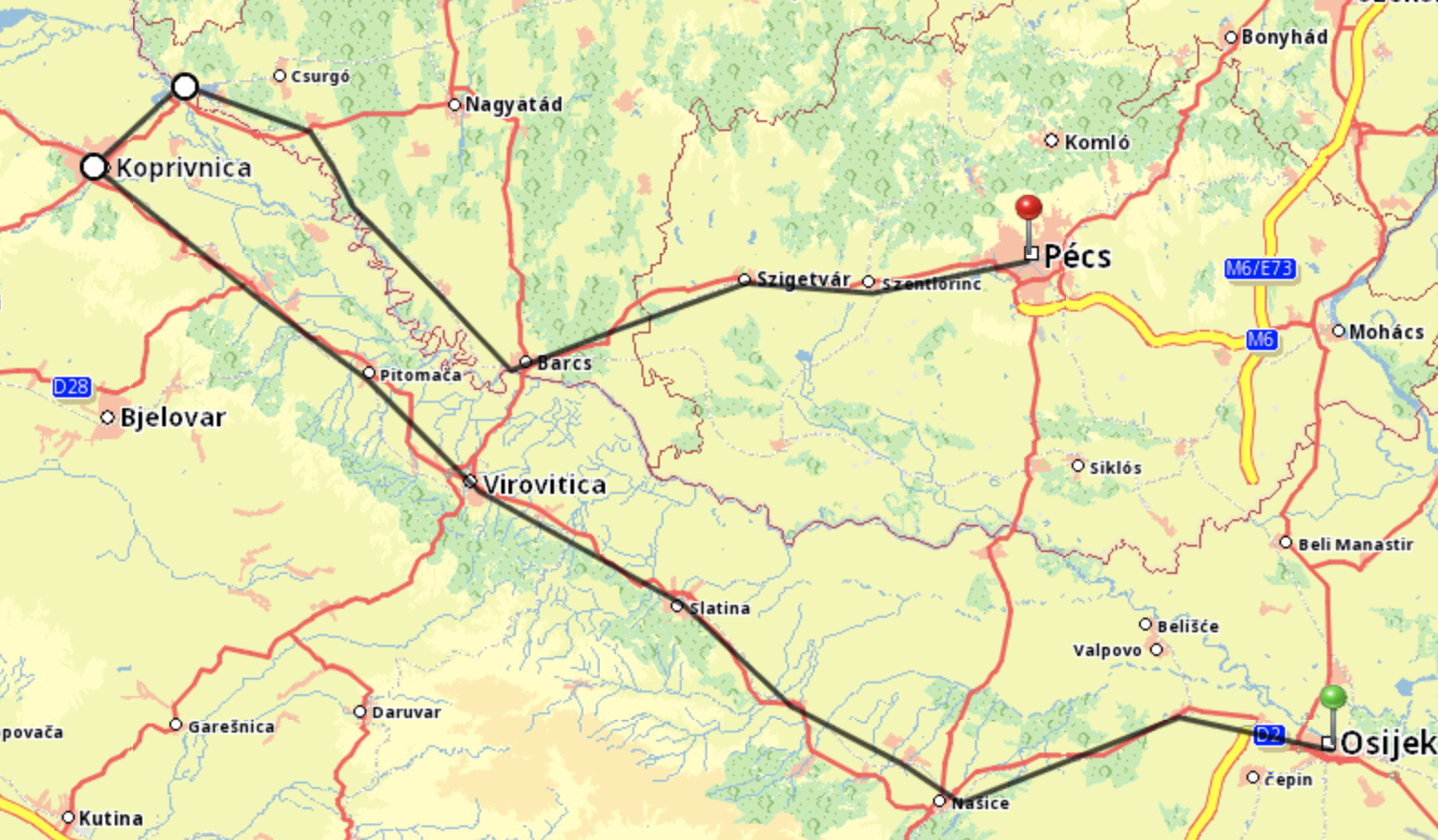 So let’s have a look at best railway map there is – Open Railway Map – and check out the area between Osijek and Pécs. Here is the relevant part – Pécs is at the top (PS), and Osijek bottom right. Orange lines are main lines, yellow-green is branch lines. The line runs through Beli Manastir, the only notable settlement closer to the border: 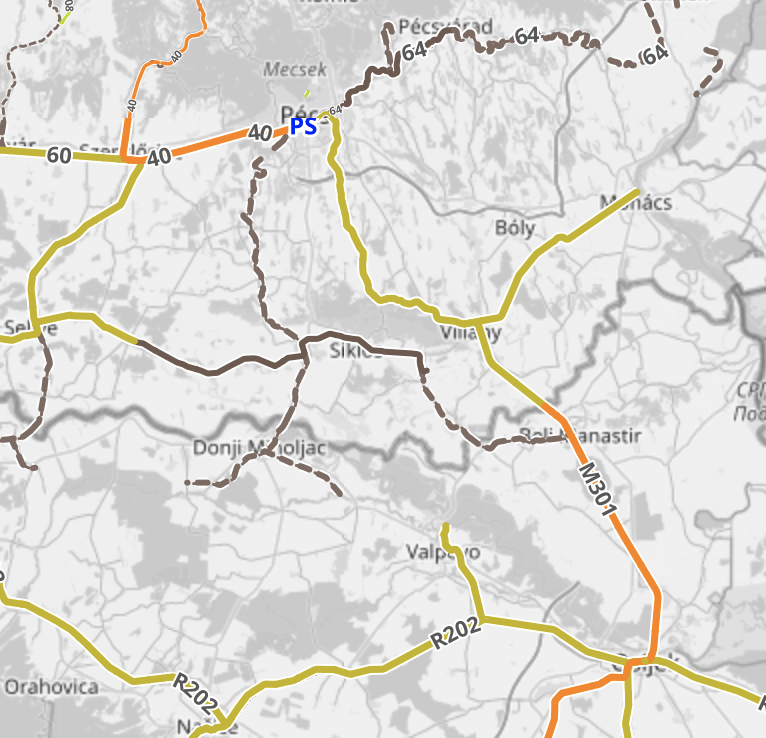 So what does Deutsche Bahn give us for each section?

Between Beli Manastir and Pécs there are trains: 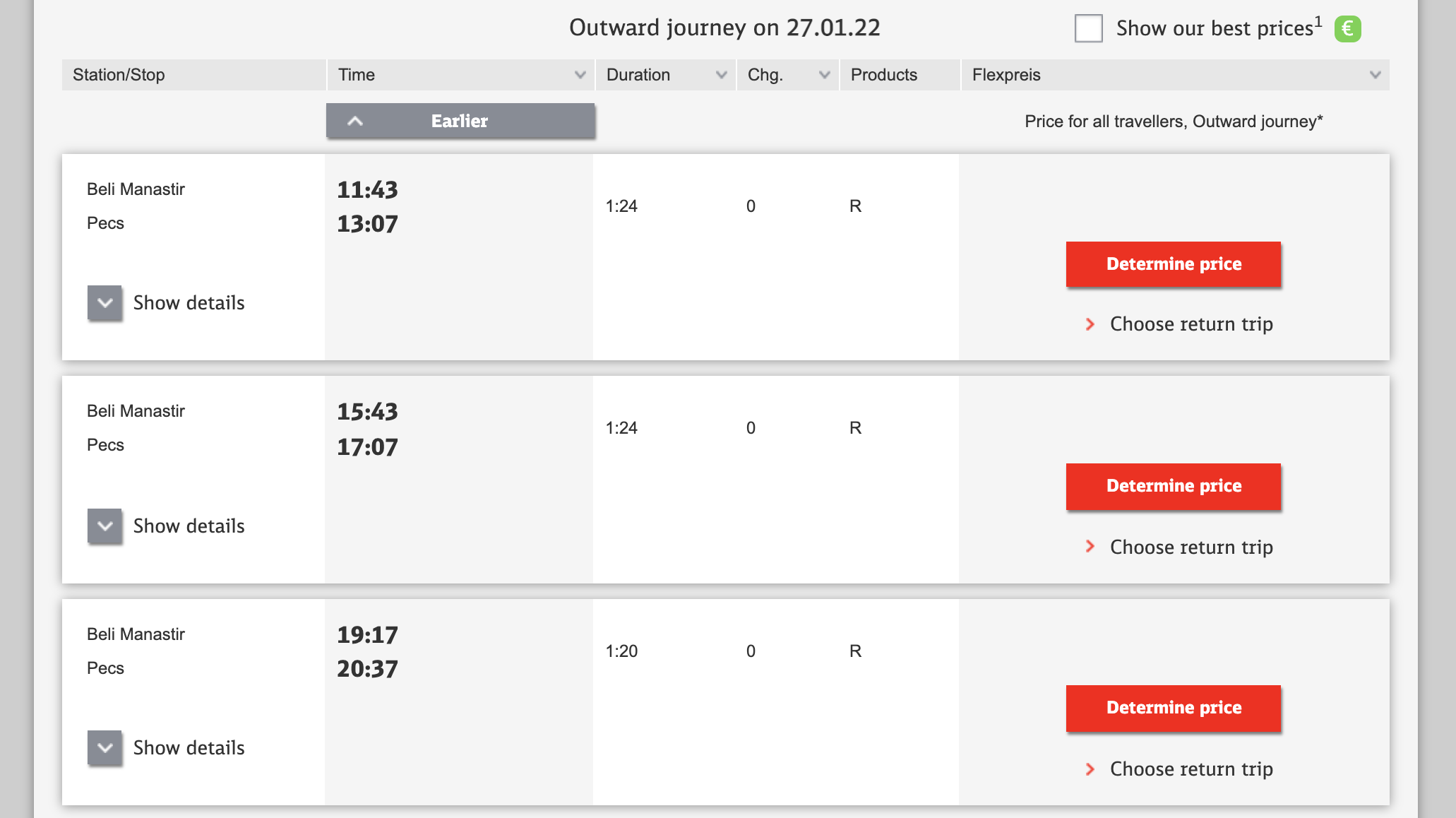 But DB finds nothing for Osijek – Beli Manastir – it gives an error:

So let’s look at the website of HŽPP, the Croatian passenger railway operator. Bingo! There are trains! 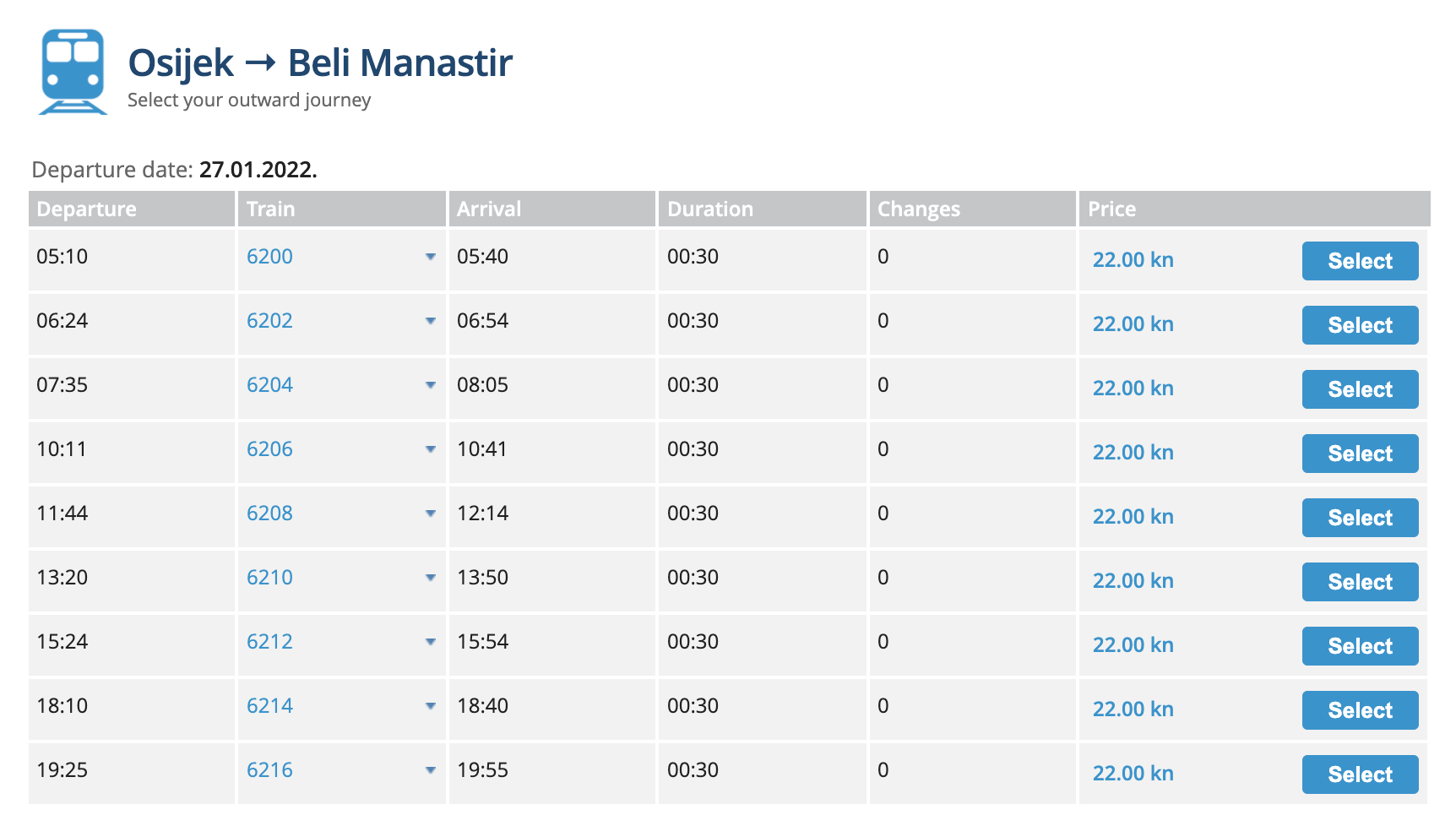 What is going on here?

Data on long distance trains in Croatia (InterCity services) are available in Deutsche Bahn’s site, while regional trains (like those that run on the Osijek – Beli Manastir route) are not – that data is only on the HŽPP site. On the Hungarian side it is different – Hungarian railway MÁV provide data on all of their trains for inclusion in Deutsche Bahn’s search. And to be absolutely sure we have it right can confirm these trains run on MÁV’s timetable tool (Schedule tab, not Buy Ticket tab).

The crux is this: trains do run between Osijek and Pécs, with a change in Beli Manastir. But the task to find an adequate connection is absurdly complicated (and beyond the ability of most non-locals) – because no complete European railway timetable exists.

Put this one into Deutsche Bahn’s search and you get… no result!

So off we go to Open Railway Map (only the cross border part shown):

There are through lines between Hendaye (France) and Irún (Spain).

Deutsche Bahn can find us trains – regional services and TGVs – between Bordeaux and Hendaye – this looks OK:

And a few trains between Irún and San Sebastian:

So Deutsche Bahn does not show anything the short cross-border section between Hendaye and Irún.

But what about the lime green line on the Open Railway Map excerpt above? That’s a Euskotren Trena line. And Euskotren data – despite the services being publicly owned and run – is not available from DB. But there is a train every 30 minutes from Hendaye (Hendaia) to Amara-Donostia, the main terminus in Donostia-San Sebastián – full timetable here: 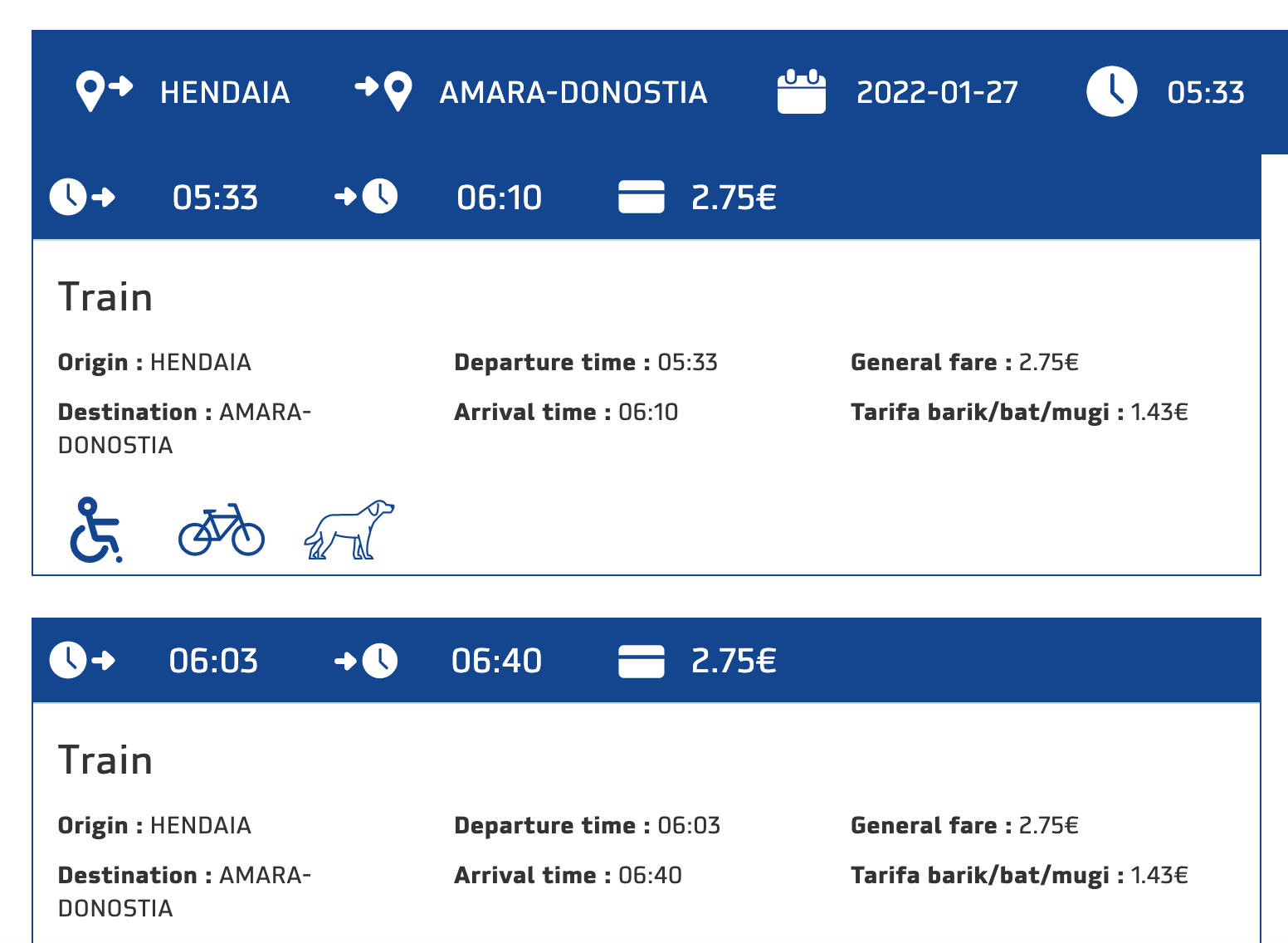 But we’re not quite done… Deutsche Bahn shows only very few trains between Irún and San Sebastián. That’s because Deutsche Bahn does not show the local Cercanías trains (these run on regular lines, so are separate from Euskotren, but stop at all stations) in its search either. To find these you need to use this search. While long distance trains in Spain are in this search. In other words there is not even a proper and complete timetable within Spain. There is also the ridiculous issue that Cercanías trains run only to Irún, when they could run as far as Hendaye to connect with French trains (and SNCF trains could likewise run to Irún) – but that’s an issue of lack of services, and this blog post is about timetables.

So in this case as well, the cross border train service is comparatively good – a train every 30 minutes – but trying to find out what runs, and how services connect together, is unnecessarily complex.

To conclude, as I hope these two cases have shown, before we begin to really be able to build a Skyscanner for Rail in Europe, we need a solid European digital timetable that reliably has all trains in it. Until we do, cross border rail is destined to suffer. And the infuriating thing in both these cases is that the cross border service – the trains themselves – is quite reasonable, and that should be the complex bit! But information provision – that should be the easier bit – is what’s lacking.

Photo Rights
Photo of the MÁV train at Beli Manastir, by @larsvr06 on Twitter, used with permission