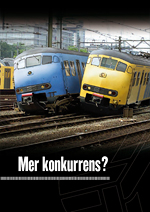 So private train companies cause more crashes do they? That’s the message being put out by SEKO, the Swedish trade union of Service and Communication Employees. They use the image above, with the slogan ‘Mer konkurrens?’ (shown as a small version in the image here to the right), making people think that privatisation and competition on the Swedish rail network is going to cause accidents.

But hold on a moment. As I’m a bit of a fan of rail travel, I know the trains in that image are not Swedish but Dutch – Plan V or Plan T according to Wikipedia. Google is also a great tool – it has allowed me to find this post on a Dutch blog that shows the original image used by SEKO and – surprise, surprise – the blue train in their image is actually a crude Photoshop job. Both trains in the picture were actually owned and run by Nederlandse Spoorwegen, the Dutch state owned rail company. So I reckon the image is rather deceptive. Plus have a look at this list of rail accidents from Wikipedia – a fair few of those are on state-run railways!

So what’s the wider issue here? Well, I’m not altogether happy with privatisation of railways, and as the UK experience with Railtrack has shown, having the network itself (and especially the maintenance contracts) in the hands of private firms can be a problem. But the quality of rail service provision depends on the technology for rail safety, and the quality of public service agreements signed with the firms providing the services. Look at SNCF – brilliant engineering, but as far as I’ve ever experienced it, lousy customer service.

As for Sweden, I suppose campaigns like this one from SEKO are to be expected, as public transport ticket pricing is a political hot potato – this weekend in Stockholm I had to comprehend the 4th different system of SL ticketing since I started going to Stockholm just over 3 years ago (changes in ticket formats, zones, prices etc.) but on this issue – as on so may others – Swedish politicians and interest groups could do with facing up to what works and what does not work elsewhere in Europe, and try to be a bit less dogmatic in their approach.