On Thursday 7th October the EU Year of Rail “Connecting Europe Express” reaches its final stop in Paris after a month criss-crossing Europe.

If ever a tweet summed up the emptiness, the hollowness, of this train, it was this by Community of European Railways’ Yann Seimandi:

Amazing experience and discussions on board of the #ConnectingEurope Express 🚄 🇪🇺 today from Brussels to Luxembourg celebrating the #EUYearofRail. A great showcase for rail #interoperability. pic.twitter.com/mzNlOpDY5o 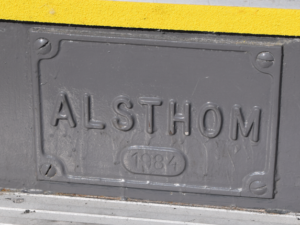 A great showcase of interoperability he says, while standing in front of a SNCF Corail carriage built in 1984 (I took a picture of the manufacturer’s plate – shown here), approved for cross border operation using the RIC standards that have subsequently been superseded, and a carriage of a type no longer deployed on cross border intercity routes. A great showcase of interoperability that no-one can use on an everyday basis perhaps?

No normal European passenger can take a train like this, also rather making a mockery of the slogan for the service – Hop on! – when you literally could not do that on this service.

I only got to travel on board the train between Kraków and Ljubljana because a Brussels based contact had leaked me the link to sign up.

And the many contradictions this train demonstrated did not stop there.

While the carriages were – on the standard gauge network – interoperable, the locomotives most definitely were not – these were changed at pretty much every border crossing – and even when the same locomotive could work technically on the other side of the border!

The Poles on the leg I took from Kraków were the prime hypocrites – instead of deploying one of their older locomotives that could have hauled the express as far as Ostrava hl.n., they opted for a Newag locomotive built last year but so far not approved to operate even a few kilometres into Czechia – so the locomotive had to be changed at the last Polish station.

While the railway industry keeps on making demands of EU decision makers for funds to assist with interoperability, here is a railway company – and PKP is a member of Community of European Railways, the organisers of the Connecting Europe Express – investing in new rolling stock that is less interoperable than older designs. Railways are masters of not practicing what they preach.

And so it continued…

There was a Connecting Europe event in France – one of the most complicated countries in which to travel on an Interrail pass! – trumpeting the value of Interrail passes.

European Commissioner for Transport Adina Valean appeared at events where the express was stopping in Bucharest (tweeted here) and Ljubljana (my picture, below), but of course flew to both places rather than taking the train.

Then of course there was the issue that the Connecting Europe Express was not one train, but three – one for the Iberian gauge in Spain and Portugal, one for the standard gauge network in most of Europe, and a third train for the Russian gauge lines in the Baltic States. And between Portugal and Spain (Iberian gauge), between Croatia, Serbia, Macedonia and Greece (standard gauge), and between Lithuania and Latvia (Russian gauge), the Express travelled on routes where no passenger train currently runs.

It instead felt very much like the whole thing was organised to make the railway industry and local politicians feel good about themselves – with grand events with local political dignitaries organised throughout the route, and lots of nice soundbites about how rail was helping with the climate transition, but little in the way of concrete action.

Travelling on board the train was also a sort of hollow pleasure – what’s not to like about being the only passenger crossing Slovenia in a SBB 1st class panorama car? Or doing Zoom calls from a SNCF Corail conference car? And exploring corners of Poland I would never otherwise see, or being whisked up to the top of old steelworks buildings in Ostrava now turned into tourist attractions with EU money?

But hang on. Should I really be the only passenger in an entire carriage? That felt wrong.

Yet while all of that was a joy in some strange way, the conversations on board worried me too.

The deep inertia of the railway companies. The inability of the European Commission to see rail as a system – whose market share as a transport mode needs to be boosted. The obsession with infrastructure and building new lines and speeding them up, when other aspects – the absence of good cross border services, the impossibility of booking tickets in a simple manner (a problem I faced with my own trip to Kraków) – seem to barely get a mention.

And all of this set against the achingly cheery tweeting of European Commission DG MOVE and Community of European Railways about the whole thing, while the legitimate critique made by rail nerds of some of the aspects of this publicity train seemed to fall on deaf ears. And I could probably finance my Trains for Europe campaign for a good few months with the budget it took to run this Connecting Europe Express for just a few days – was a tour like this good value for money? I am not at all sure.

So long then, Connecting Europe Express.

May you live on as some nice stickers on a few carriages and locomotives that will run on some of Europe’s railways for months and years to come, symbol in some way of the many headaches Europe’s railways face, but in some small way testimony to the joy of rail travel too – that all of us ought to better be able to benefit from on cross border routes. Something that this publicity train will not help us achieve I fear.