BBC London lunchtime news had a gleeful report of the unveiling of the new prototype Routemaster bus today, the latest stage in the New Routemaster saga I’ve blogged about here and here. This is a screenshot from the TV report: 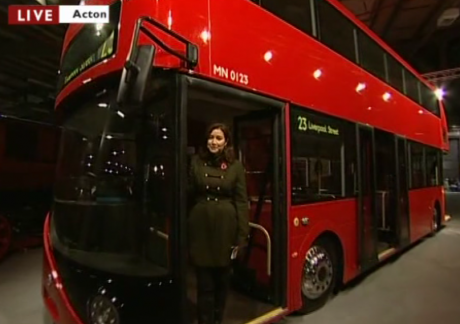 There are five interesting things from the report.

First the shots inside look remarkably like the inside of a Wright Eclipse Gemini – which is essentially what the Routemaster is, with some slightly amended bodywork and an extra staircase. Same sort of idea as the Wright StreetCar – take a regular chassis and add some smarter bodywork.

Second, it’s unclear from the report, and from the photo here on the BBC website exactly where the engine is located on this bus – surely the back platform is too wide and deep in this mockup (see this rear pic on the BBC website, more here). So expect some further design changes when a functioning version appears next year.

Third, 5 working mockups will be on the roads in 2012. So Boris will manage, by the skin of his teeth, and a narrow definition of ‘on the road’ manage to achieve his campaign pledge. If, of course, the timetable doesn’t slip.

Fourth, Mayor Watch reports that TfL has applied to the Intellectual Property Office for Registered Design Protection of the vehicle’s exterior design, meaning these things could only run in London. Yeah, great. So that’s going to drive up the cost of each of them for London bus firms. Vanity project.

Lastly, BBC London wants views on what the proper name for the bus should be, and their TV report claimed some people wanted to call it the Boris Bus. You can e-mail suggestions to them at yourlondon {at} bbc.co(.)uk – how about the bullshit bus? Or is that too harsh?

[UPDATE]
Thanks to a tweet from @EmmaBrooks_GVA I’ve discovered this article on The Guardian’s website about the bus. In the fifth paragraph it says that Boris claims it will “bring in orders from around the world”. Erm, I doubt it! The fourth point above is confirmed by the editors’ notes in the official press release. Plus the bodywork is being made in Ballymena, Northern Ireland and all the complex bits – the hybrid drive chain that Boris has been raving about – is probably not built in the UK anyway (Wright usually works with Volvo, but I can’t find any details anywhere of who is supplying the drive chain).

Oh, and while we’re at it, here’s a further quote from the press release: “From Saturday, the route 18 will be operated by double deck buses […] This is the second bus route to be debendified in the last month, following the route 149 that saw the bendy bus banished in favour of double decks on 16 October.” This sounds like rather party political style emotional communications, using Boris’s own vocabulary! Do London government press people not have to stick to the same standards as central government comms people?

[UPDATE 2]
Bus-geek-tastic overload today… I’ve just come across this report on the hybrid buses currently running in London. While fuel economy is in some circumstances better, its the availability issues that are the biggest headache. All of this to be fixed by 2012 and Boris’s new Routemasters? Hmmm.