Anyone’s encountered one of my Brexit diagrams knows the score: I find the process of mapping out complicated political decisions as flow diagrams useful, in that it helps us better understand those processes.

And Germany just now is confronted with a very complicated party political conundrum: who is going to be the centre-right (CDU-CSU) candidate at the September 2021 Bundestag election? Angela Merkel – Chancellor since 2005 – is not running again, so this really matters.

There are essentially three stages to the process. First, her Christian Democratic Union (CDU) party will pick a new chairperson at a congress on 16 January – to replace Annegret Kramp-Karrenbauer. Then later in spring the Members of the Bundestag of the CDU, and its Bavarian sister party the CSU, will decide who will be their combined candidate to be Chancellor. The CDU’s chairperson has a good chance to be chosen, but it is not a foregone conclusion. Then last but not least the CDU-CSU would likely need to emerge from the election and probably form a coalition with another party to then be able to govern – with the CDU-CSU more than 15% ahead of any other party in the polls at the moment, their chances of keeping the Chancellor position for themselves look very good.

So who is it going to be? Armin Laschet? Friedrich Merz? Norbert Röttgen? Markus Söder? Or someone else? My latest set of diagrams should help!

Please note: we are lacking hard data for pretty much all of the stages of this. This is the best data there is. We know from Morgenmagazin that Röttgen is gaining somewhat with the wider population, but we do not know how this will play out among the 1001 delegates who will actually vote.

Each diagram will be produced in both English and German, and high resolution PDFs and PNGs, the ODS file of my calculations, and the XML file for draw.io (the tool I use to make the diagrams) are always uploaded here. Diagrams and data are Creative Commons Sharealike Licensed – feel free to make your own diagrams based on mine.

Version 3.0.0 – 8.1.2021
This version makes some changes to the calculation as to how Röttgen/Laschet votes would redistribute in the 2nd round to Laschet/Röttgen, and adds Spahn to the second stage in light of this. 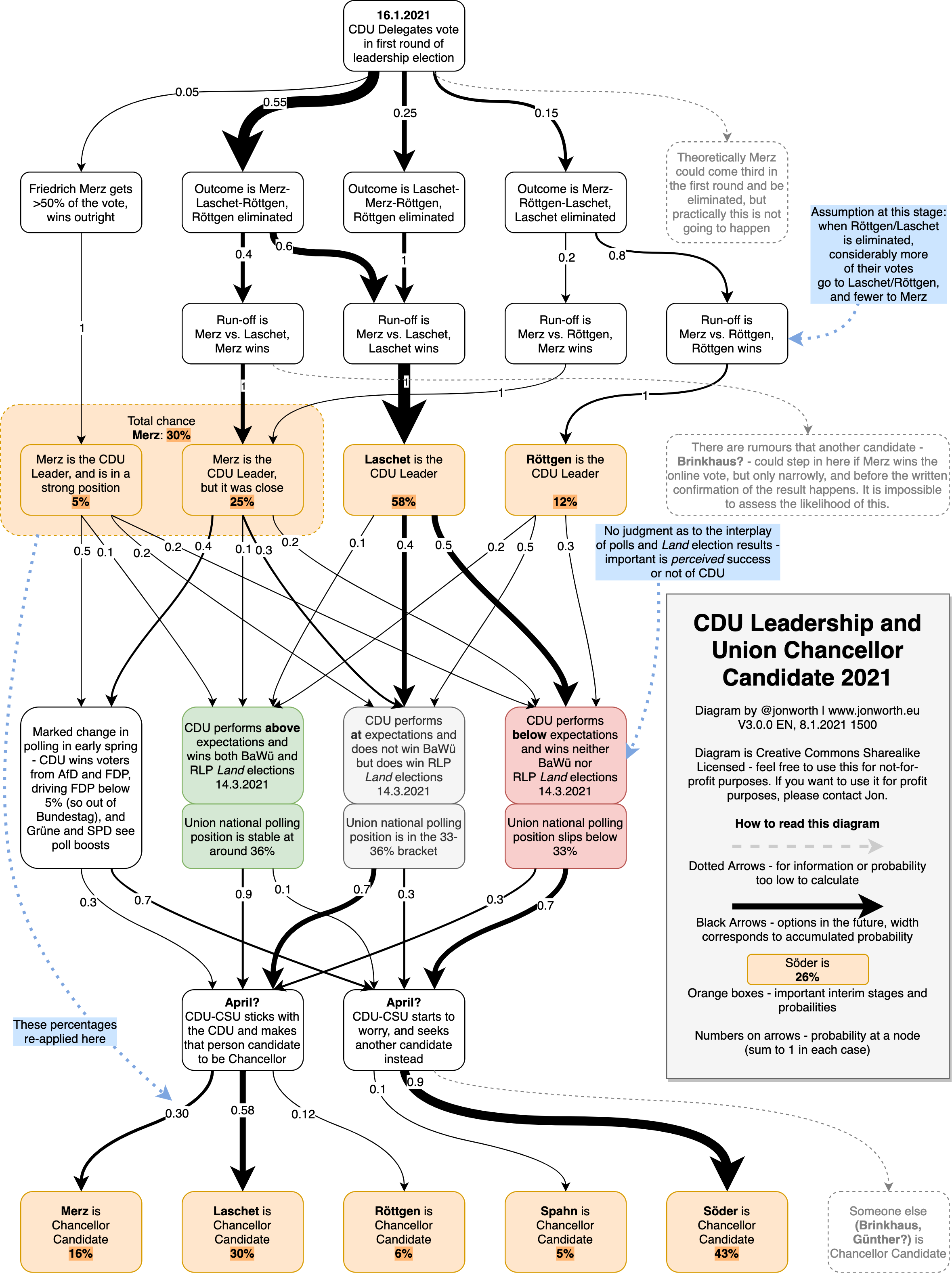 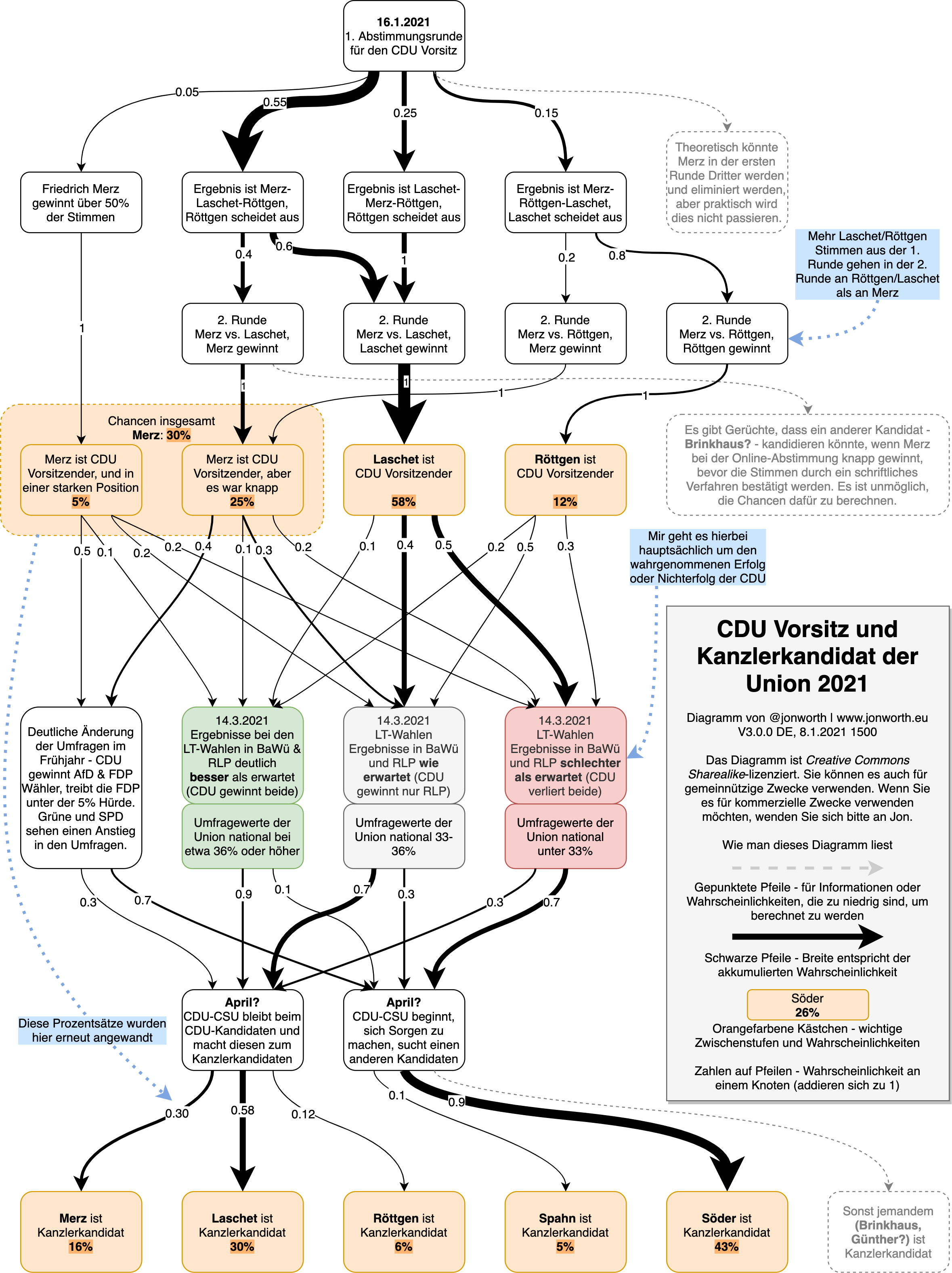 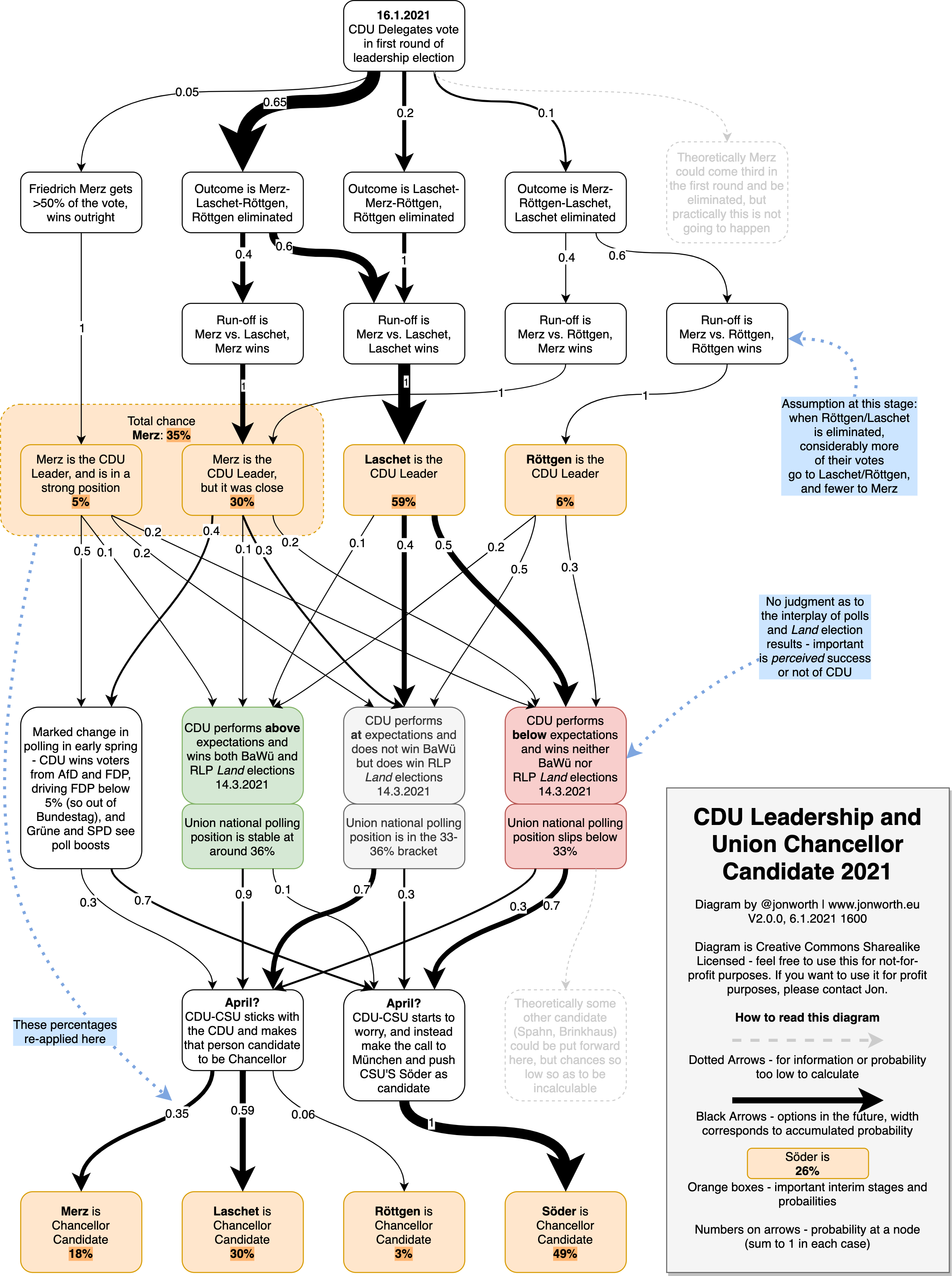 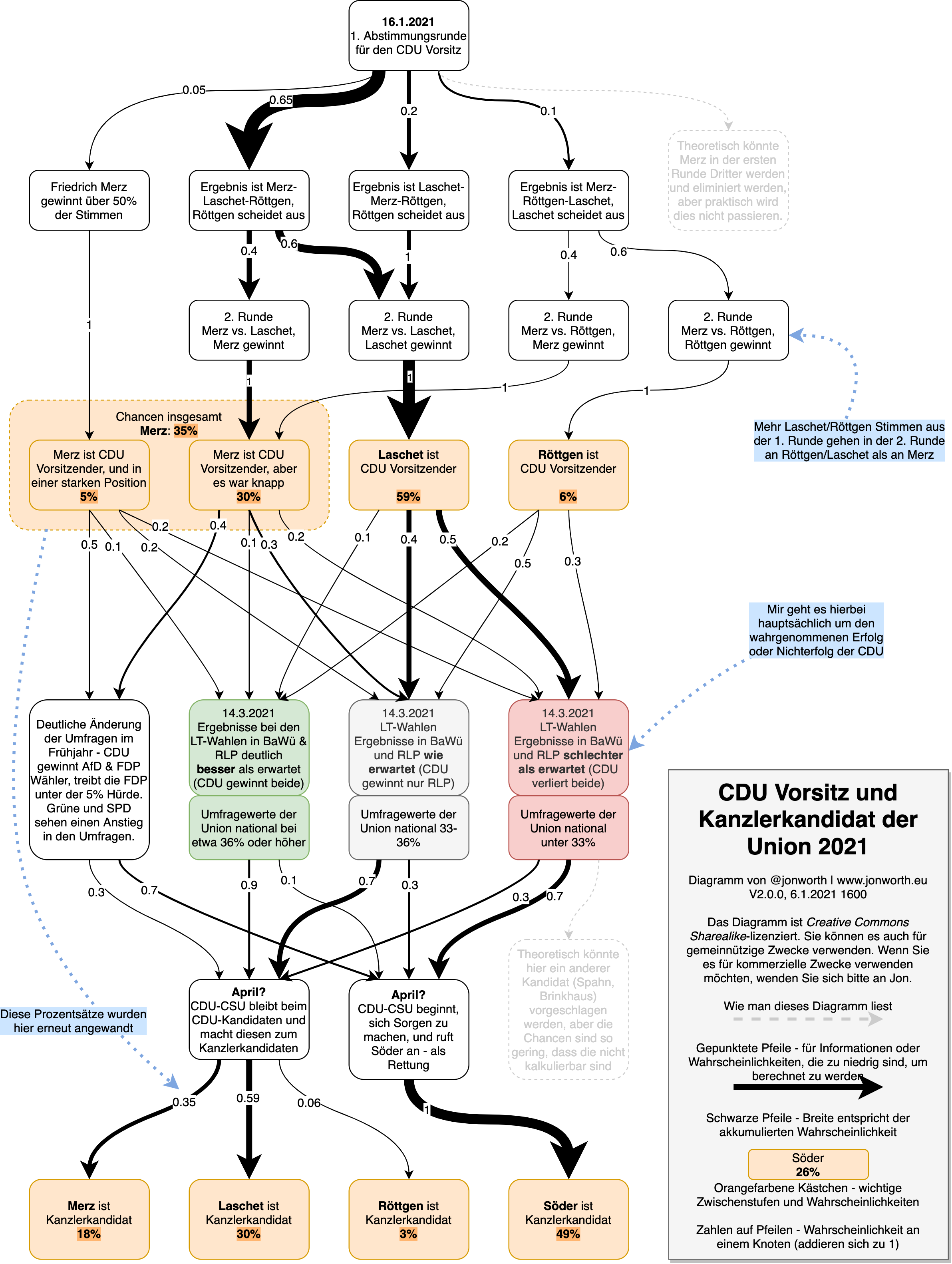 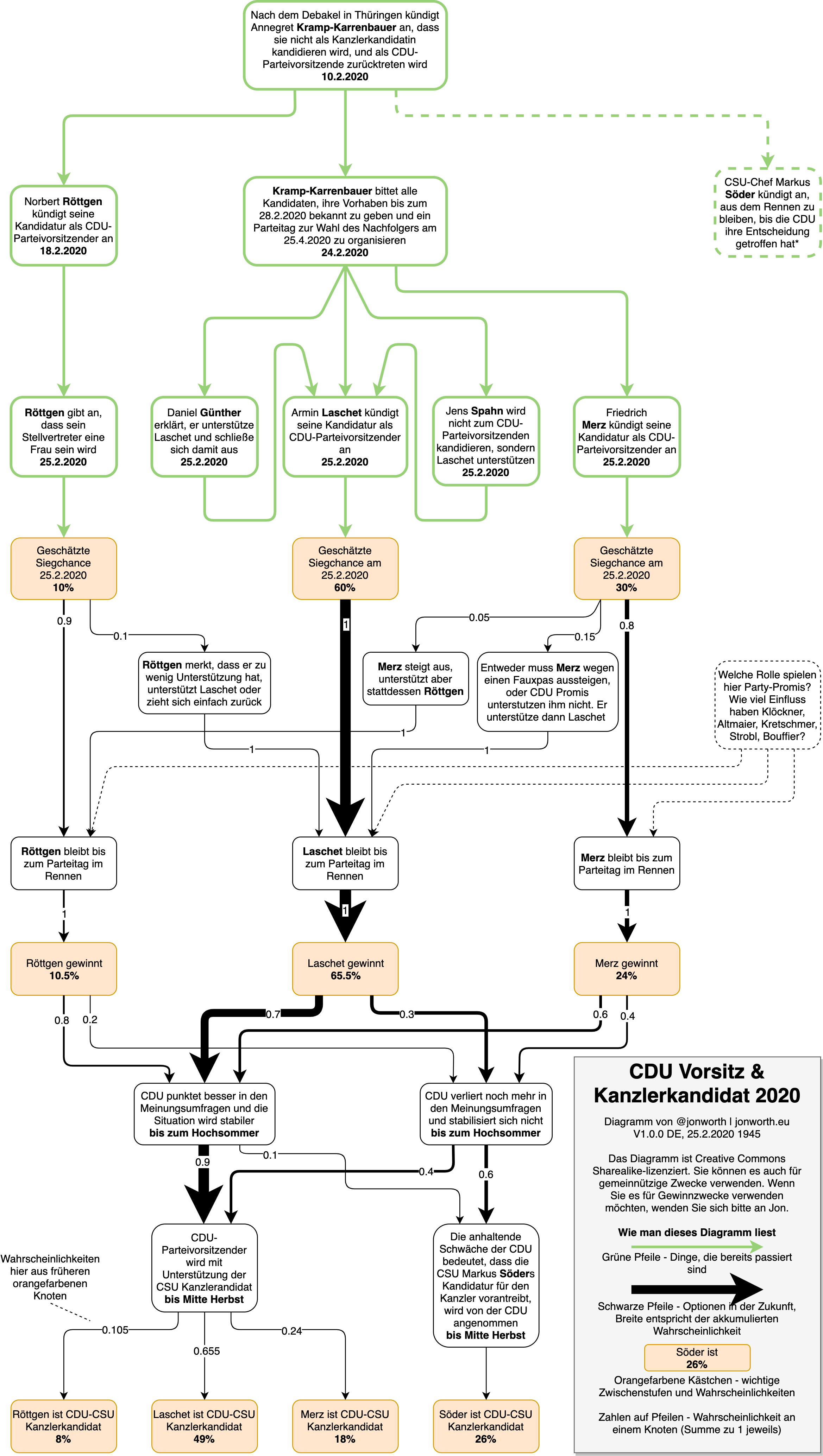