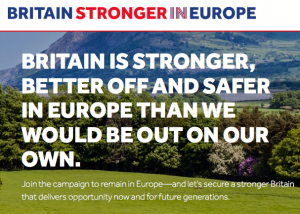 So, all hail the ‘Remain’ side in the referendum campaign! Place your trust in “Britain Stronger in Europe“, the Will Straw and Stuart Rose campaign. It’s like the late-1990s “Britain in Europe“, only with more muscle, more fight, and more nationalist fervour!

Gone are the solitary star and the yellow line in the 1990s logo, and here are the reds and blues of the UK Union Flag. As Bloomberg pointed out, the European Union itself was not even mentioned at the launch, and – at the time of writing – the words “European Union” and “EU” are not mentioned anywhere at all in the Stronger In website.

That’s not being clever; that’s actually disingenuous, and you can’t possibly expect people to not see through that.

Sorry, Remain campaigners, but all of this is no good. You cannot out-nationalist, out-patriotise, out-flag-wave the antis. So don’t actually try. By campaigning this way you concede the turf to them. OK, I am sure someone somewhere in a focus group told you that nationalism and patriotism pushes voters’ buttons, but sounding like a nationalist to be , oops, sorry, pro Britain Stronger in Europe, is like going backwards to go forwards.

That you keep on putting “Stronger” in every sentence sounds rather macho and this is wrong too. Too much of the vocabulary around Britain’s relationship with the EU is about fighting, winning, and masculine shows of strength. As I’ve argued before, being seen to want to “win” is a problem for Cameron’s renegotiation. Yet here we go putting strong or stronger in every sentence.

The Leave folks must be rubbing their hands with glee about this. An establishment-led (see its board here – FT (€)), poorly framed and poorly communicated Remain campaign, whose chair says people “will make a hard-headed, practical calculation in the coming referendum”. No they won’t. Have these people learned nothing from the fiascos of Yes to Fairer Votes and Better Together?

So @decoassociacao my video response to your video is now online! And do send it to the people featuring in your video! #CrossBorderRail

My view on what does and doesn’t work with rail in 🇵🇹 👇
https://www.youtube.com/watch?v=DO6nUBr5p_g

Cash cow. Neither Renfe nor SNCF give a damn. When the cooperation between the two ends in December maybe it changes a little? It sure can’t get worse…

The Man in Seat 61@seatsixtyone

@jonworth @FlywheelMedia1 @CER_railways I'm of the opinion that @Renfe_SNCF have seriously mismanaged pricing on the cross-border TGV routes, especially Paris-Barcelona. This isn't for tomorrow, it's for OCTOBER: 2