Today Twitter turned its Favorite* function (with its star symbol) into a Heart – as the company explains here. This met with a lot of criticism from regular Twitter users, perplexed by the new function. Here are a few example tweets from Anne Roth, Armin Wolf and Patrick Jackson: 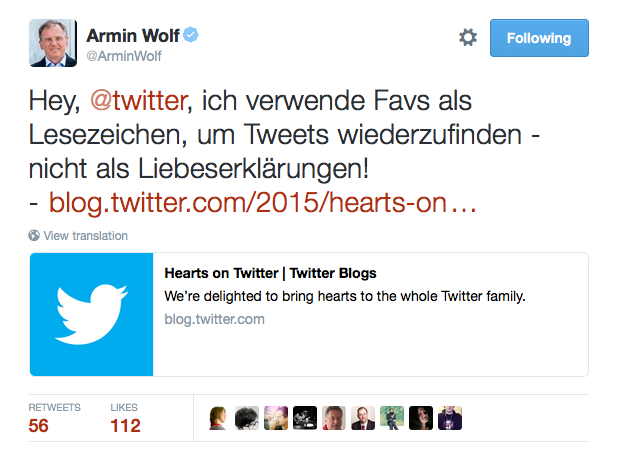 These users did as I did – they used the Twitter Favorite function as a bookmark tool. That, according to this 2013 Brandwatch piece, is how 60% of Twitter users used this function. Favorite was always a bit too much of a positive notion for me, but I lived with it as what Firefox calls Bookmarks, Internet Explorer calls Favorites. It was neutral enough, ambiguous enough. I also know I am not the only one to be perplexed by what a Favorite was for – it is one of the most common questions I am asked in the social media training I run.

Changing this function into a Heart loads the function with extra meaning – it becomes a kind of endorsement, akin to Like on Facebook. The Like function is one of the reasons why I think Facebook is less good for political debate that Twitter is (was?) as I argue here. The neutrality of Twitter’s terms is a strength of the network – for some purposes.

Now as the Brandwatch piece above alludes to, endorsements on Twitter could be OK – it is fine to have a quick way to signal support for something, or thank someone for something. But that needs to be as a supplement for other functions, not as a replacement for them.

The real reason that many regular Twitter users used Favorites as a bookmarks is because trying to find things in Twitter is one hell of a mess. Searching for tweets on a hashtag right now is OK, but try to find a particular one from a week ago on a popular tag – next to impossible. Try to find a tweet about an issue by a particular user if you don’t know the precise keyword? Likewise nightmarish. So Favorites were the way to go back to old tweets, to archive things for future reference, or to compile lists of tweets that would in the end be cited in blog entries or news stories. Putting it another way, Favorites were one of the ways to systematise Twitter, to use it more as a professional news tool than as a social network among friends.

So keep your Heart function, Twitter. It might well have its place. But for us news junkies on Twitter, the folks who generate all kinds of content and thousands of tweets, we could do with some tools to help us out as well – a bookmarking tool, and better search options. Twitter is de facto a news tool – how about some tools for those people who use it as such?

* – I know it ought to be Favourite, but I am spelling it as Twitter does, rather than using correct English.