I’ve seen its lights blinking there, out across the north runway beyond Schönefeld. I have even run along its south runway in the Airport Night Run. But today I finally set foot in the as yet unopened Berlin Brandenburg Airport.

I signed up for one of the standard tours of the airport here (there are also night tours, and bicycle tours), and a group of about 20 people were waiting for the start of the tour at Terminal D of the old Schönefeld Airport at 2pm. The tour costs €10, and takes you on a coach around the main sights, and – importantly – takes you to Berlin Brandenburg from the old Schönefeld airport (there’s little public transport to the former – understandably). The tour is in German, but even if you don’t speak German you see fascinating things, so in my view would be worth doing even if you don’t speak German. I do speak German, and quotes here are translated for the purpose of this blog entry. 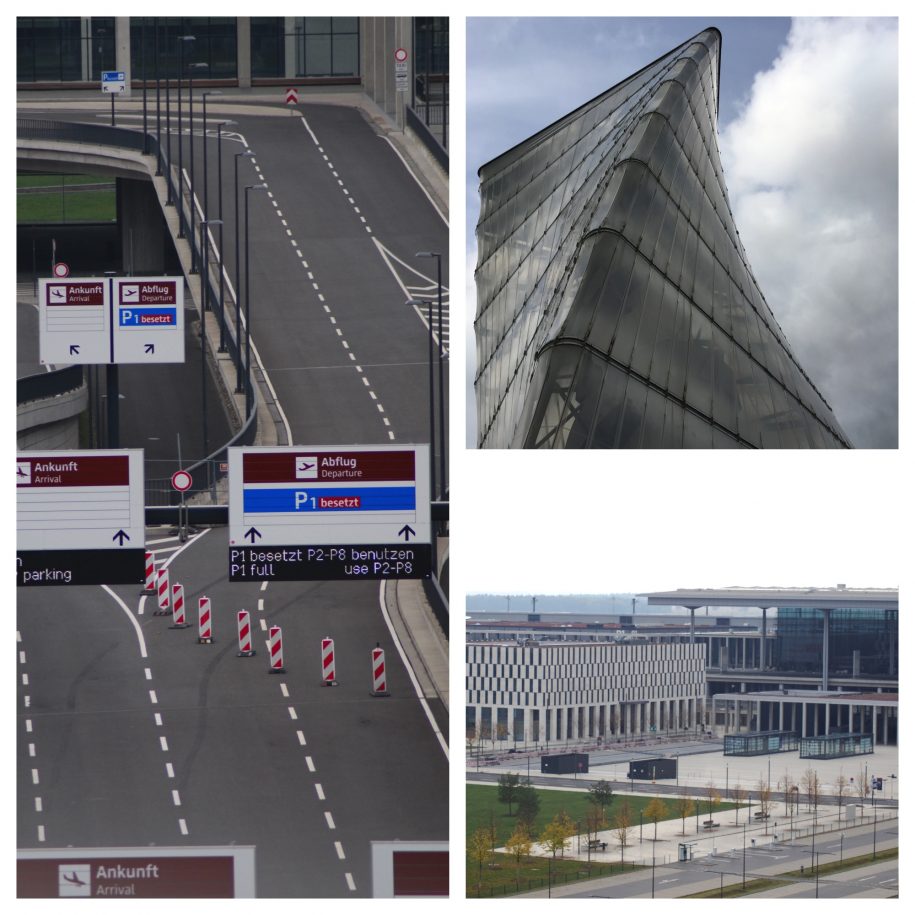 The first stop is the visitor centre and visitor tower. These can be visited for €2, and are accessible by car and very intermittent public bus, without needing to participate in a tour. Most of the airport approach roads are open to cars and bicycles, but not motorbikes – there were six deaths of racing motorbike riders racing on these roads in 2014, our guide told us. The exhibition at the visitor centre makes no explicit mention of the delay to the airport’s opening; there’s just a map that has colour coding for what is and is not built yet (although part of what is built is defective!) There are souvenirs though. The view from the top of the tower is pretty good – some photos from there in my Flickr set – photos 5-18.

At the visitor centre, and indeed throughout the trip, you are accompanied by a rather stern lady who parrots out a stream of stats one after the other – the length of the runways, the heights of the towers, the seating capacity of an Airbus A320. She said she was open to questions, but on average would take just one before, conveniently, whisking the group to the next stop. While the whole tour takes two hours, it feels pressured – you never have enough time to really see anything at your own pace, or to ask what is really going on.

Next stop was the airport departures hall. Photos are allowed in here, our guide told us, but you have to speak to the press service if you want to publish them, she said with an edge in her voice. So pics from outside only, or taken from the bus, are on Flickr, and some here. The departures level of the terminal is an impressive and actually superficially a very good building – it is light and airy, well set out, and built with good materials (it looks anyway). It’s also built on top of a railway and S-Bahn station.

But, well, what about that roof… is it too heavy, as press reports have suggested?

I was the foolish one to venture to ask the guide about the roof. “Well it has stood for five years!” snapped the guide. “Why would it fall down?” But which roof is it that is the problem, I ventured, and is it the one over our heads? She acknowledged it was the terminal roof, and stated that checks were happening but had no doubt it would be fine. 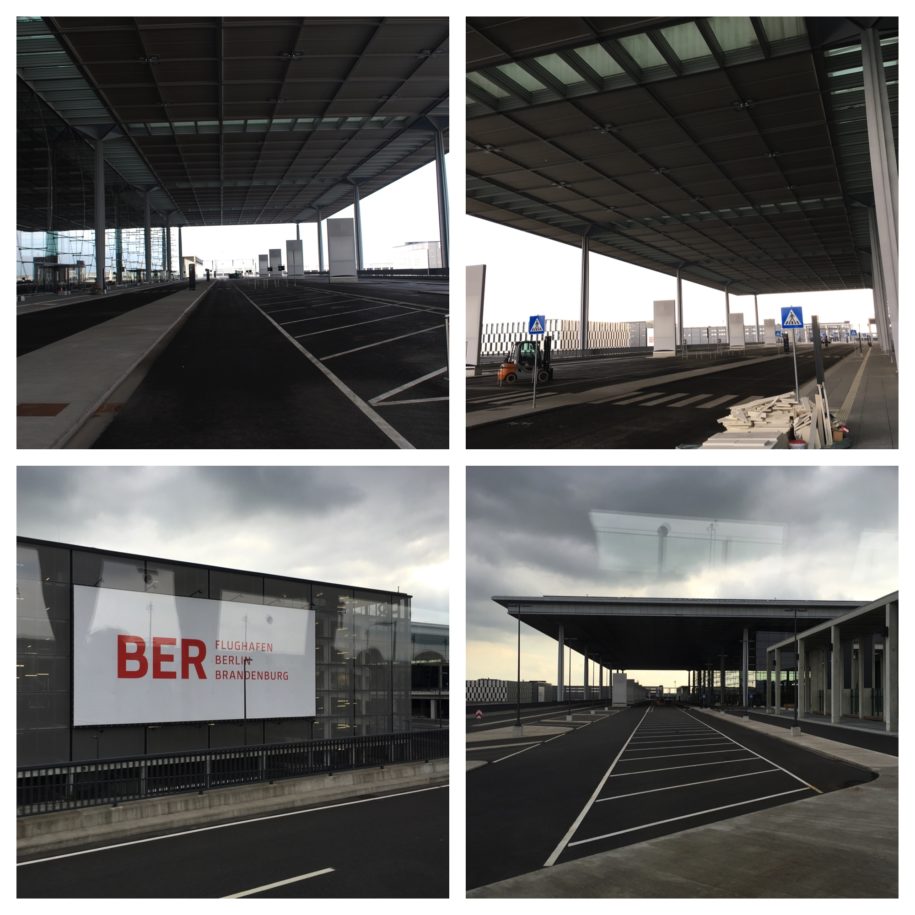 The southern end of the departure level cannot be entered we were told, because that is all finished. That bit had plastic all over the checkin desks, and screens and computers installed, while in the main hall part it was clear that all the electric equipment had either not been installed or had been removed for some reason. Likewise some floor panels were removed.

The northern end of the terminal is the part intended for low cost carriers like Easyjet (“It doesn’t even have air conditioning!” we were told), and we were allowed in there. That part does, to all intents and purposes, look finished, but – rather odd I thought – all the departure screens were on and were working, and there like at every other entrance there were security personnel to let us in. Are these people there 24/7? This all contributes to the feeling in parts of the building, and in the way the visitor centre works, that staff are prepared as if the airport will open tomorrow. Yet we know that even 2017 looks unrealistic.

I also pushed the guide about the state of play with the building works, and that they are supposed to be stopped. “Imtech [the company at the centre of the problems] have told us they have the money and will restart in a few weeks,” the guide said. “And of course it is quiet here now because it is a weekend,” she added. Almost laughably we went past a sign labelled “Beschleunigungsoffice” (trans: acceleration office) located under the air bridges – apparently that dates from Mehdorn’s time trying to sort out the project.

Back on the bus and on the way round to the airport apron the guide launched into a long description of the volleyball team formed of airport employees, and explained with some pride about how the administration office and canteen for employees was already fully in use. I had to suppress a snort – frankly I’d rather know why this damned airport is not open than hear about volleyball successes! Yet this, like the whole tour, contributes to the overall sense of denial about this project – it is as if everyone is waiting for it to open tomorrow, but we know that it will not. 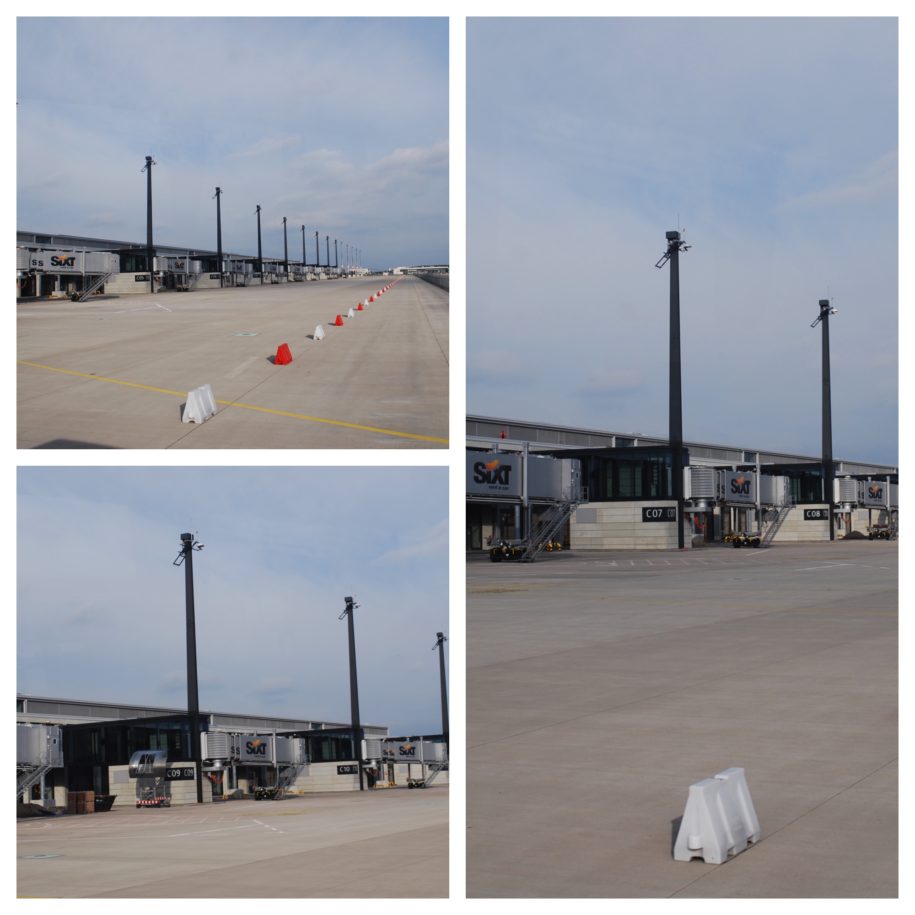 On the apron (where photos to publish were also not allowed) the issues with the planning of the airport became clear. “This is the originally planned two air bridge A380 gate,” stated the guide proudly. So, yes, me the pain participant again, asked her “So is that the only one?” “Lufthansa has one that had to be built later,” she conceded. Also when pushed she acknowledged that Berlin Brandenburg can only handle 27 million passengers a year – a bit of a problem when Berlin already has 30 million passengers a year. So the old Schönefeld terminal will hence stay open, even if Berlin Brandenburg opens, with a capacity of 34.5 million passengers a year total. Considering that this airport was meant to solve Berlin’s airport issue, that looks quite a glaring problem – by the end of the decade Berlin will be at the limit again. Also building an airport with a single A380 gate strikes me as weird – was this to be a big hub airport, or not? The planning never really answered that, and then plans were changed as the building moved forward.

And then that was it. Back in the bus, and back to Schönefeld. “I hope,” the guide said as a parting shot, “that I have shown you that how all you read in the newspapers is not true!” No, actually. You’ve payed only a very cursory attention to what we asked you, and we’re no clearer now as to what is going on in that airport than we were at the start.

I imagine the tour there is like what being a tourist in North Korea is like. You can see lots of things, but you can understand nothing, and if you dare ask a question you are none the wiser afterwards.

A fascinating but rather surreal afternoon.