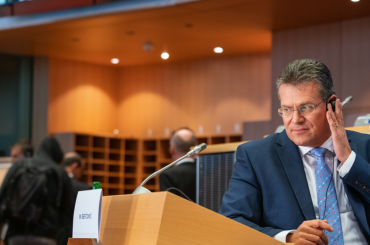 This tweet caught my eye this morning: Underlines the problem facing the EU as retaliatory steps liable only to reinforce this perception. The EU may be an effective negotiator, but it is pretty terrible when it comes to comms. https://t.co/zaBwCAtf5L — Anand Menon (@anandMenon1) August 2, 2021 My first reaction: […]

So Theresa May is going to make her highly awaited speech in Florence tomorrow. There has been plenty of analysis and speculation about what she is and is not going to include. Here – in a blog post I will update as more sources are available – are some of […]

It has been a pretty normal week in matters Brexit. On Sunday on the BBC’s Marr show, Michael Gove announced he was withdrawing the UK from the London Fishing Convention that dates from 1964. What’s that got to do with Brexit you may well ask. It’s about taking back control […]

Denis MacShane has written an essay entitled “Europe’s parliament: Reform or perish?”, a paper which he says is a contribution to the debate about the future of the European Parliament started by Andrew Duff, Julian Priestley, and Anand Menon and John Peet. MacShane tries to take a position in which […]