Summary
I wanted to buy a computer monitor, and rather than ordering from Amazon, I chose a smaller firm instead – Compuland, based in Wilhelmshaven. The order was a story of woe, and awful and ridiculous service – and they sent me an empty box. There is no way I will ever order from this firm again. Here I will explain what happened. If this story makes you change your mind about Compuland, then do please leave a comment below.

The order
On Sunday 1st February I was searching for a monitor to purchase. My decision was between a Asus PB278Q (review) and a Dell U2715H (review). The built-in USB 3 hub and better stand meant I was leaning towards the Dell. I checked the price comparison at the German tech magazine Heise for the Dell, and on the day I was purchasing it looked like there was an excellent price for the monitor – €303.89, rather than the normal price of around €450. This however was not the cheapest price that the monitor had ever been offered – this was €286.10. This graphic shows the best prices found for this monitor at Heise: 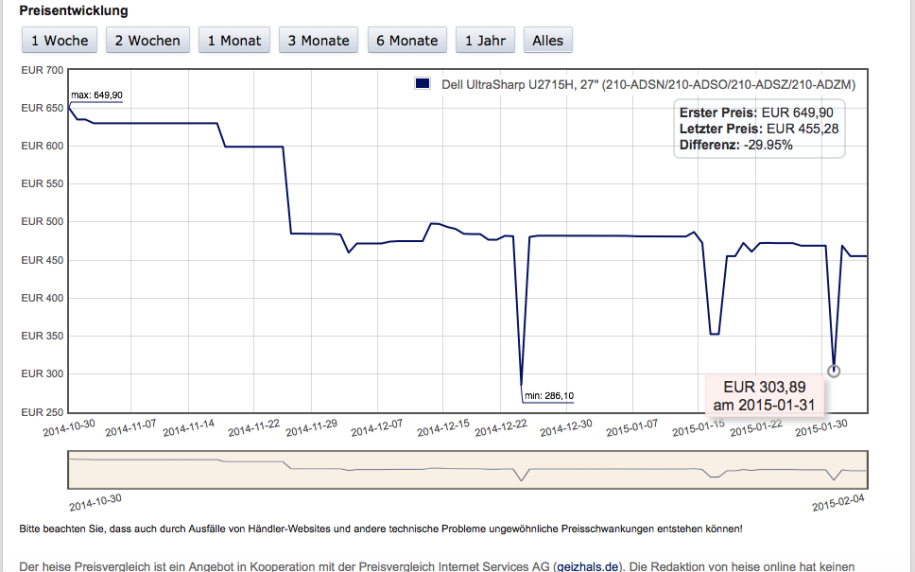 On 1st February two companies – Compuland and DriveCity – were both offering the monitor at this price. Compuland had decent scores for customer satisfaction at Heise, so I made my order. This is the final screen confirming the order, and inviting me to pay by bank transfer – and I made this payment immediately. The price here is slightly higher as I had also added a laptop stand to the order – the monitor itself was €304.87 (not sure how there’s a 98 cent discrepancy with Heise).

The empty box
On Thursday 5th February a box from Compuland arrived at my door. It was so light – 0.14kg – that the DHL delivery guy thought there was some sort of error. It turns out the box was empty… 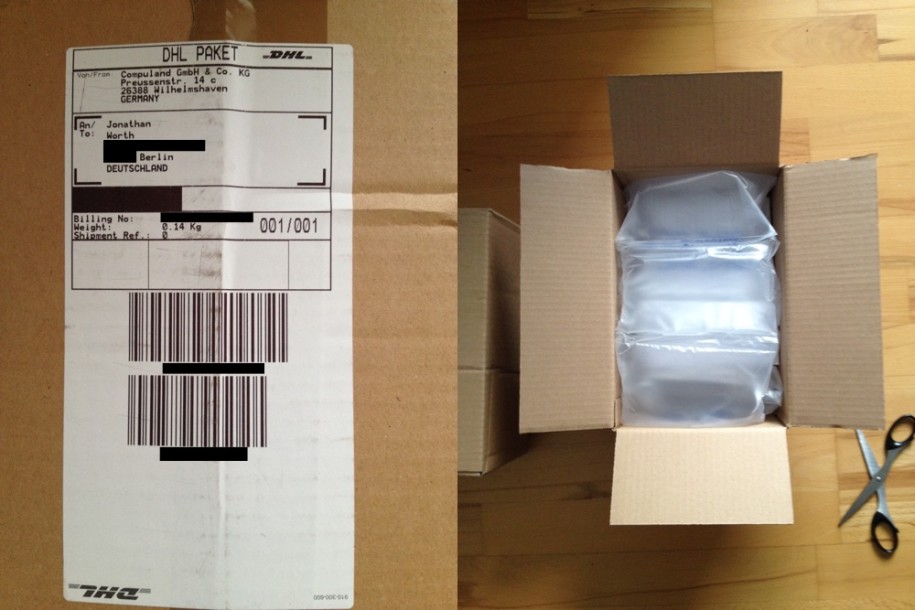 …except a letter buried at the bottom (click to enlarge): 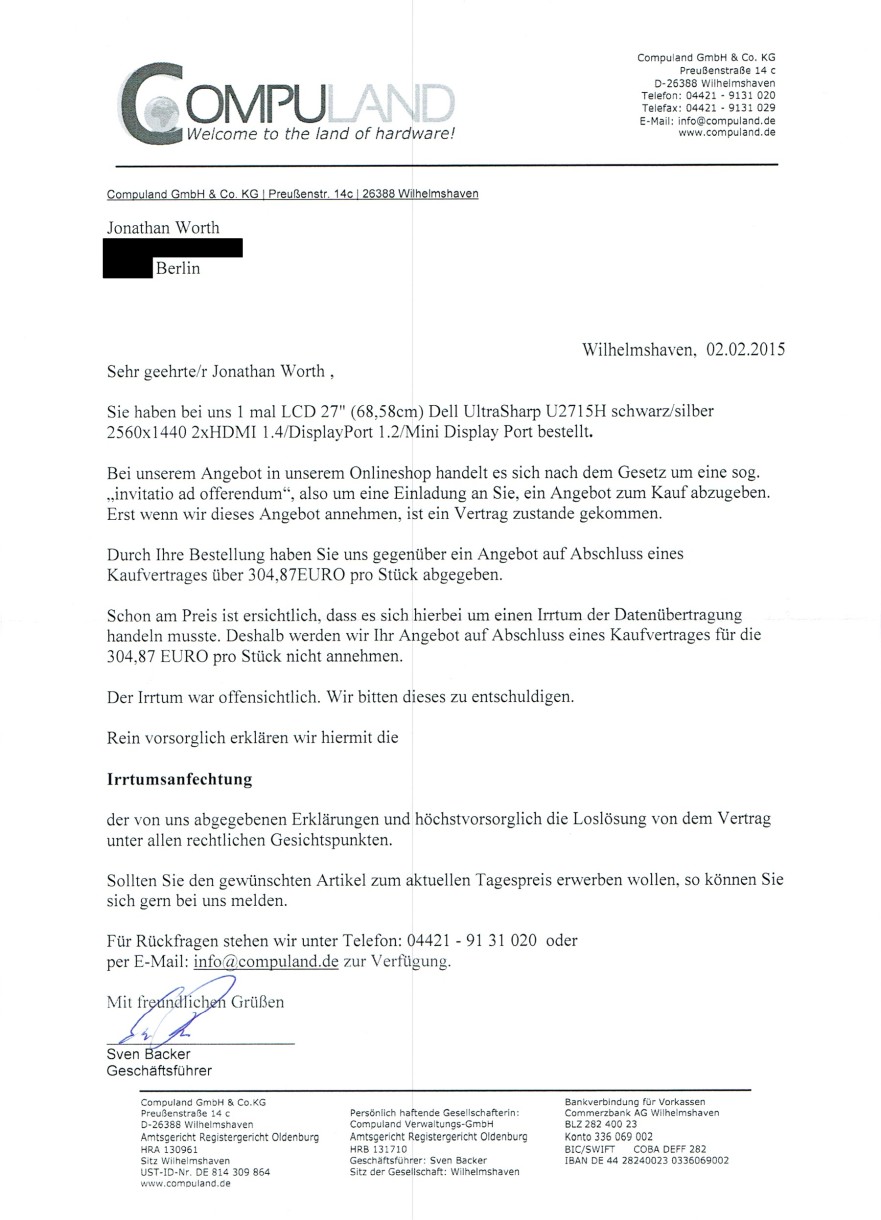 There are a number of extraordinary aspects of all of this.

First of all, why an empty box with a letter in it? Why not a letter? Or better still an immediate call or e-mail the moment it was clear there was a problem? It seems that things like this do happen from time to time, but I find this behaviour very odd. Also what if I had actually needed the monitor that week?

Second, I have a problem with the reasons stated. It was in my view not clear that this was an error, because the price was not the lowest Heise has ever shown it, and a second shop was offering the same price. The reason is also very odd – Irrtum der Datenübertragung means an error of data transmission. How, please, can such an error happen when I am simply ordering from Compuland’s own website? This reason is the same one companies typically give when something goes wrong when selling on eBay – i.e. not their own website.

Third, and this is the really sneeky part, when ordering with Compuland an order is only a legally binding order once confirmed by them by e-mail. So despite the final screen of their online shop inviting me to pay, at that stage there is no binding contract. This is to be found buried in their AGBs here.

Compuland realised there was a problem, cancelled my order, deleted the information from their system and prevented me finding out what was going on, and sent me an empty box. That is NOT good customer service!

The follow-up
Not content with this behaviour, I e-mailed Compuland in German, stating my problems with their behaviour as I have outlined above. The response from their legal department was a re-statement of the AGBs (letter in full here), but with this additional line:

(translated) We calculated the price correctly. After the calculation of the price this was incorrectly transmitted by our software to our shop, so that the article was shown at the incorrect price.

So the justification they are now giving me is that their own computer systems, internally, are unreliable and cannot be trusted! I don’t actually think this was really the error – I’d be minded to think it was actually a human error with data input but there’s no way I can actually prove that.

After this response from them I was left with no option other than to demand a reimbursement of the money I have paid them.

Conclusions
All of this makes me wonder how much we, as customers, can actually trust the prices were are offered online. It also makes me better understand the power of Amazon where I have never had a problem with the price offered.

The particular behaviour of Compuland is also extraordinary – they took none of my points seriously, made no effort to keep me as a customer, and just sought to blame their own systems. As a result they deserve this blog entry (that I will also translate into German) and I hope it discourages a few people from ever buying anything from them.

Oh, and I did buy the Dell U2715H – in person from a Cyberport store in Berlin. It’s an excellent monitor, and I am typing this blog entry using it!