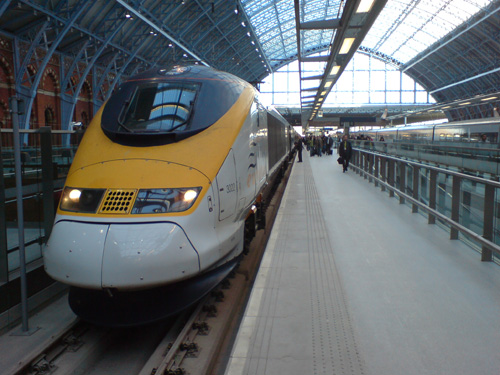 It goes at 300km/h, has 18 air conditioned carriages, runs on its own dedicated tracks, no-one ever has to stand up, it doesn’t smell, and it arrives at the fabulous St Pancras International station. It’s Eurostar – Britain’s best commuter train.

I’ve been travelling at least twice a month between Brussels and London for the last 6 months, and I simply cannot fault Eurostar. It’s not commuting in the traditional sense (but more people are doing it) – I need to book in advance and pay at least Â£54 for a return journey but it’s not yet let me down. Yet working as a freelance website designer and trainer means I can live that way, plus my calendar is set weeks in advance. The only delay I’ve faced on Eurostar – 20 minutes – was due to a security alert. I have my systems in place – I know where to go, when to arrive, which carriage to choose for the quietest journey.

The only slight problem I face is one of mentality. Website clients still cannot always understand how I manage to live in one country and work in another. But think of it this way: Manchester-London takes longer and costs more than Eurostar, and would anyone be surprised if someone lived in the North West of the UK and did website projects in London?

I’ll finish with a small anecdote. I’m arranging a meeting in mid-May with a fellow web designer in London, and he said in an e-mail to not schedule the meeting too early or too late in the day – because of the trains. I sent a rather perplexed e-mail back to him, asking why the trains might be a problem as I can reliably get to London by 0756 from Brussels each morning. No, not Eurostar he replied – First Great Western trains are the problem, from a town in Berkshire!